There’s no replacing the savory, salty crunch of bacon. Equally at home in breakfast, lunch, and dinner foods, there are ways to add this meat to just about every dish.

With that in mind, you may keep your freezer stocked with at least one package of bacon. While having frozen bacon on hand is a good plan, it also eventually begs the question of how to cook frozen bacon.

We’re going to cover whether or not you need to thaw frozen bacon before cooking it, as well as a few popular methods you can use to cook frozen bacon.

How to Thaw Frozen Bacon

While you don’t need to thaw frozen bacon before cooking, it can make the strips easier to handle and speed up the cooking process. It’s also essential if you want to wrap bacon strips around other ingredients to make Oven Roasted Bacon Wrapped Asparagus or Air Fryer Bacon Wrapped Sweet Potatoes.

If you’re not in a rush, you can thaw bacon in the refrigerator. Simply place a sealed package of frozen bacon into the fridge and allow it to thaw over the course of the day. This method works great if you’re planning to cook a bacon-filled dish the next day.

However, if you decide you want to use your frozen bacon a few hours before eating, you’ll need to utilize quicker defrosting methods. One method is to place the sealed package of bacon in a bowl filled with cold water. The water will speed the thawing process so that a pound of bacon will be ready to cook in about half an hour.

Another quick thawing method is using the defrost setting on your microwave. Before you begin thawing, remove the frozen bacon from the plastic packaging and set it on a plate. It should take around five minutes to thaw one pound of bacon, but since microwaves vary in power it’s best to check your bacon every minute.

After your bacon is thawed, you can cook it however you like, whether that’s on the stove, in the air fryer, or in the oven.

While larger cuts of meat like pork butts and chicken breasts need to be thawed before cooking, bacon can go right from the freezer to the heat. However, you will need to separate the individual strips of bacon before cooking.

If your strips are stuck together, try prying them apart with your hands or a fork. If this proves difficult, you can run the bacon under cold water for a few minutes to thaw it slightly.

Once you have individual strips of frozen bacon, you can cook them any way you would cook thawed bacon. The only difference is that the strips will take a few minutes longer to cook.

In the Air Fryer

For bacon that’s evenly cooked and supremely crispy, turn to the air fryer. Start by placing frozen strips straight into the air fryer. As the bacon defrosts, water will be released as steam. After the excess water has evaporated, the air fryer will begin crisping up the bacon strips while allowing excess fat to drain.

Cooking, bacon in a pan on the stove is a tried and true method. And it works just as well with frozen bacon!

Simply lay out strips of frozen bacon into a frying pan—nonstick, stainless steel, and cast iron are all suitable options. For even cooking, ensure none of the strips are overlapping.

Turn the burner on to medium and then cook the strips for 12 to 15 minutes, flipping midway through cooking.

Not only does this method provide you with crispy bacon strips, but it also allows you to save the bacon grease to use later. 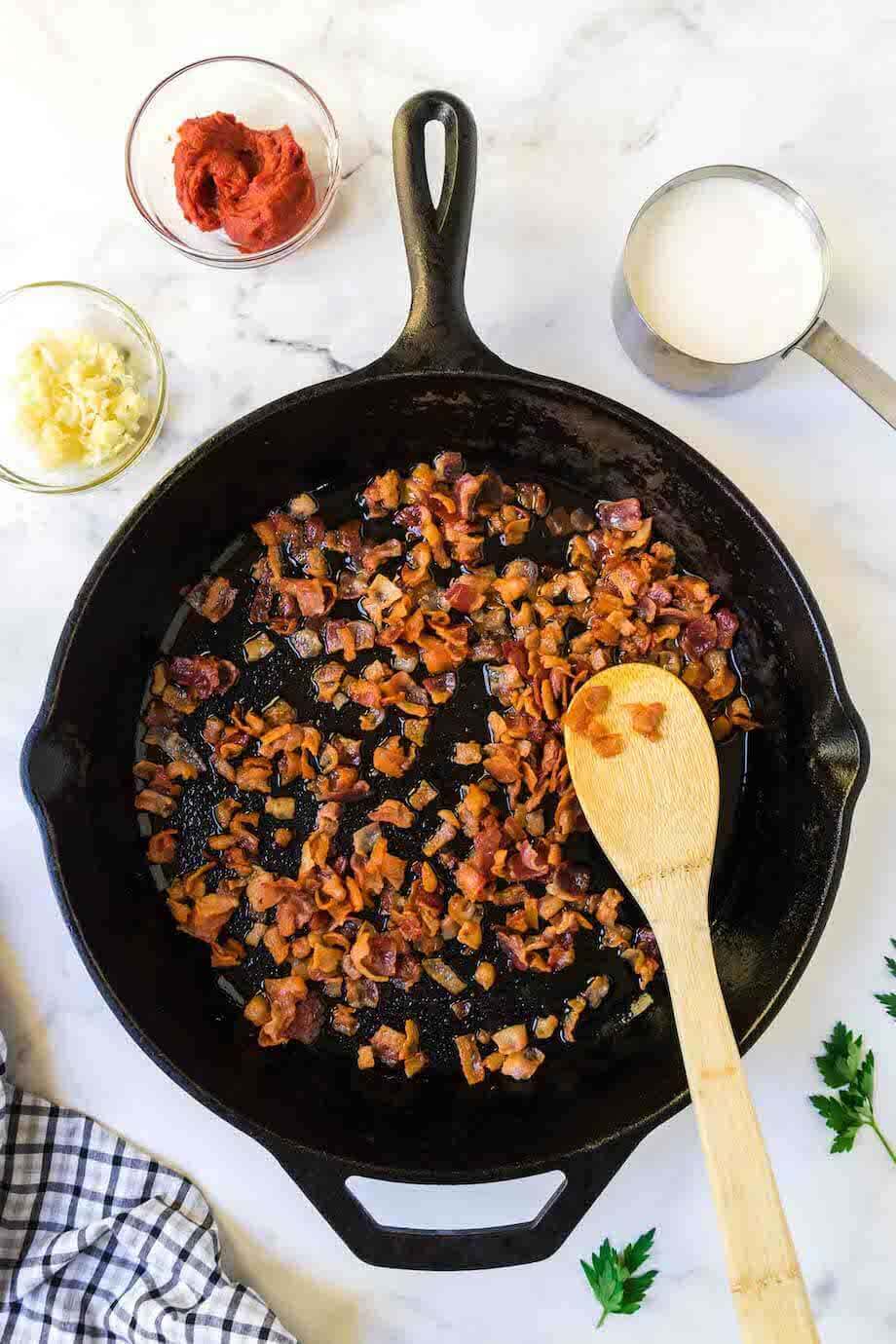 If you’re in a hurry, turn to the quickest way to cook bacon: the microwave!

After separating your strips of frozen bacon, lay them on a plate in a single layer. Cover the strips with a paper towel to catch splattering grease. Cook the bacon in the microwave for five to eight minutes, checking for doneness near the five-minute mark.

If you need to feed a crowd or are looking to cook up a big batch of bacon to store and enjoy throughout the week, use the oven.

First, preheat the oven to 400ºF. Next, lay a wire cooling rack on top of a baking sheet then add the bacon strips to the cooling rack in a single layer.

Cook the bacon for 15 to 20 minutes or until it reaches your desired level of doneness.

Whether you’re picking up a package of fresh bacon for breakfast tomorrow or stocking your freezer for future meals, Coleman Natural offers all-natural bacon that’s suitable for every occasion. Our hickory smoked uncured bacon provides the smokiness you crave and our sugar-free applewood smoked bacon provides all the flavor with none of the sugar.

Not only is our bacon delicious, but it’s also produced with high standards in mind. All of our bacon products are made from hogs that were raised on American family farms without the use of antibiotics or added hormones. These standards are part of the reason why our bacon has earned the Parent Tested Parent Approved seal of approval.

To learn more about your favorite meats, read these next: How To Tell If Bacon Has Gone Bad: 4 Easy Signs How Long Do Hot Dogs Last? What Does “Natural” Mean on a Meat Food Label?