Pork chops are a great staple protein due to their low fat content, quick cook time, and versatility. But a dry, bland pork chop is enough to turn you off of the cut forever. That’s a real shame, because when cooked well, pork chops can be moist and delicious!

We think it’s time to say goodbye to tough, boring meat. Use this guide to cook perfect pork chops every time, no matter the method.

Your road to moist pork chops starts before you even preheat the oven. Here’s what you need to do in advance to guarantee tender, juicy pork.

Try a Marinade or Brine

A marinade or brine can introduce more moisture or lots of flavor into your meat before you cook it.

A marinade is a sauce that introduces extra flavor to your pork, depending on the aromatics or herbs you choose to include. A brine pulls more moisture into the meat, which keeps your pork juicy.

Keys to a Great Marinade

A marinade is made of a blend of acid, oil, salt, and aromatics. Each ingredient plays its own important role.

The oil helps the marinade stick to the pork. Plus, the flavor of the aromatics will seep into the oil, so it can spread more evenly across the surface of the meat. The acid will help to break down the connective tissue a bit, making the meat more tender. It also brightens the flavor of the marinade. Be careful not to overdo the acid or marinade for too long, or it can actually “pre-cook” your meat and make it tough. Unfortunately, there is no definitive amount of acid that is “too much,” since it depends on which acid you’ve chosen and the other ingredients in the marinade. We recommend following a tried and true recipe for a marinade to ensure portioning is correct.

Salt will help your meat retain moisture. You can add salt directly, or use a salty liquid like soy sauce or Worcestershire sauce. And aromatics like garlic, shallots, herbs, and spices will impart flavor.

When your marinade is ready, place your pork chops in a zipper bag and pour the marinade over top. Make sure everything is evenly covered before closing the bag and squeeze out as much air as possible. 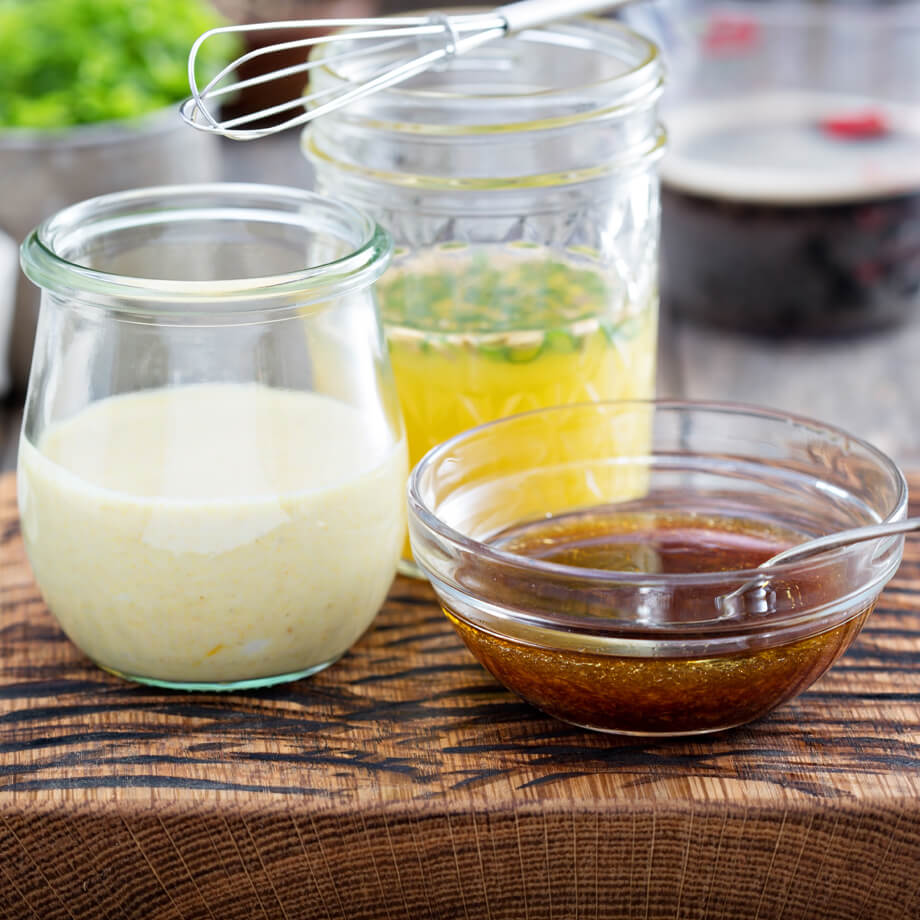 Marinade in the refrigerator for a minimum of 30 minutes, flipping the bag occasionally. Ideally, let your pork chops marinade for 1 to 8 hours. A longer marinade may make the flavors in your pork richer.

When you’re ready to cook, remove the chops from the bag and discard the marinade. Pat the chops dry before cooking to remove the excess.

Keys to a Great Brine

A brine introduces more salt to your pork chops than a marinade, which can make the meat more tender and juicy. A brine is usually thinner and imparts less flavor to your meat. This is great if you plan to make a pan sauce, a gravy, or if you just like your pork chops simple.

You can make a wet brine with salt, water, sugar, and some aromatics like rosemary, sage, garlic, or thyme. Not all brines include sugar, but it can help with the browning of your pork chops.

To make your brine, start with enough water to cover the pork completely in a shallow baking dish. Two cups should be enough for at least two pork chops. Heat the water over medium heat, and add ¼ cup of kosher salt, ¼ cup of sugar, and your aromatics. Heat until salt and sugar are dissolved. Cool the brine completely before pouring it over the pork.

Let your pork chops brine in the refrigerator between 30 minutes and 6 hours. A longer brine will bring more moisture into the pork, but a quick brine will still be helpful if you’re in a rush to get dinner started. A thick pork chop (1 ½” to 2”) can brine for longer, but avoid brining for more than 8 hours to prevent toughness. After brining, rinse pork chops and pat dry to remove excess salt. Balance Speed and Temperature When You Cook Pork Chops

Since pork chops are often on the thin side, they need to cook quickly to prevent drying out. After brining or marinating, let the pork chops reach room temperature before cooking. This reduces your cooking time.

And choose a cooking method that either cooks the pork quickly at a high temperature, or a method that can be carefully controlled at a lower temperature like baking or using a slow cooker.

Pan-searing is an easy way to cook your pork. Use a heavy pan, like cast iron or stainless steel. You’ll need to get the pan nice and hot to create a crisp crust on your meat. To know if the temperature is right, splash a few drops of water into the pan. If they gather into a single ball and roll around the pan together before evaporating, the pan is the right temp.

Add your oil or cooking fat, and when it’s shimmering, add your pork chops. Sear for 3-4 minutes on each side, until the pork has reached the internal temperature required by your recipe. If you cook on a hot enough pan and pay close attention to the temp, your pork chops shouldn’t be overcooked.

Here are a few recipes you can try that use the pan searing method: To go low and slow with your pork chops, look to the slow cooker. This less common method of cooking pork can result in delicious, juicy meat!

Before adding to the slow cooker, start with a short sear using the method above. This can help create a barrier that keeps moisture inside.

Add your seared pork chops to the slow cooker in a tasty sauce and cook for around three hours. Avoid cooking much longer to prevent your meat from getting tough.

Try these slow cooker recipes on your next pork night:

Similar to the slow cooker method, baked pork chops should start on the stovetop. The sear will give them a nice crust, and then you can carefully manage the temperature inside the oven to make sure they don’t get too hot and overcook. Use a cast iron or stainless steel pan, so you can move the whole thing from stovetop to oven without dirtying another dish.

Cook times will vary based on the thickness of your pork chops, so a meat thermometer is a must to prevent overcooking. See the next section on Finishing Your Pork Chops for temperature recommendations! Since the temperature of a grill is harder to manage, you may think it’s not a good candidate for pork chops. But you can actually use the same concept as the pan sear-to-oven method on the grill.

After rinsing your brine or patting off your marinade, place the pork over the hottest part of the grill for 2 minutes on each side. Then move the pork to indirect heat, either on an upper grill rack or to the side, away from the flame. Remove your pork when the internal temperature is just below 145ºF (see Finishing Your Pork Chops below).

Here’s a grilled pork chop recipe to try with a tangy balsamic and rosemary marinade!

How do you know when your pork is done?

The USDA recommends cooking pork to an internal temperature of at least 145º F to be safe, but you may choose to cook to a higher temperature based on your preferences. Use the temperature guide below to find the right level of doneness. 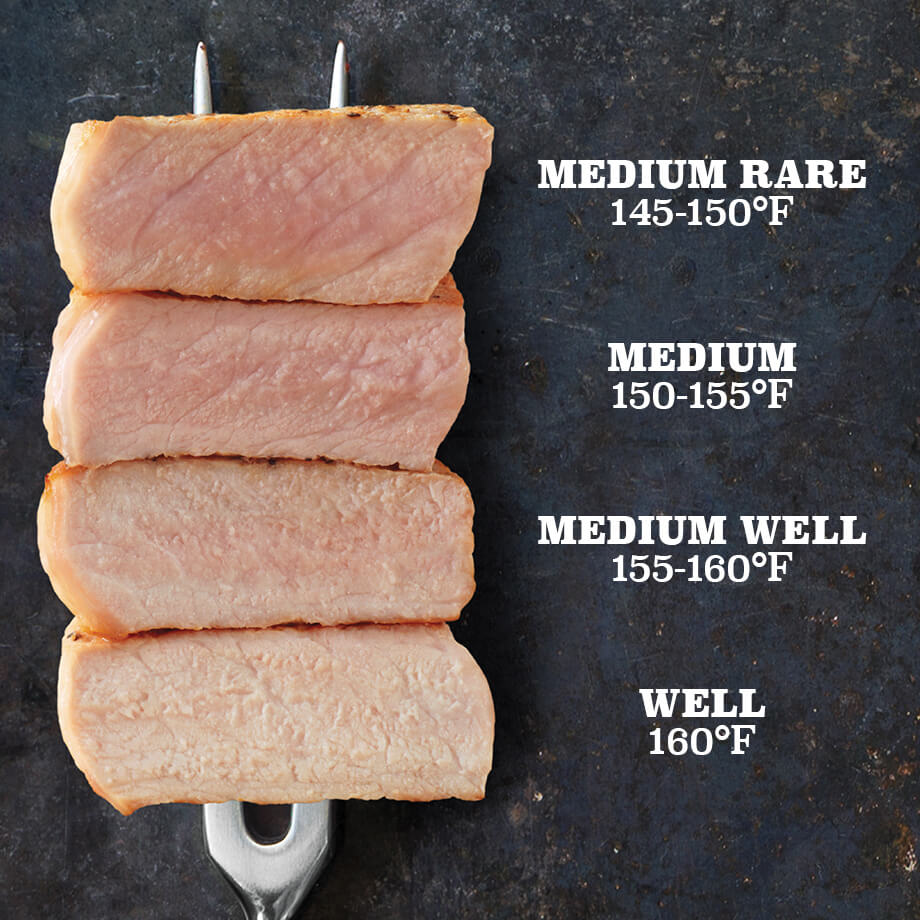 Keep in mind that the internal temperature of your meat will climb by a few degrees after it leaves the oven, stovetop, or grill. So you may want to remove it at 140º F to 142º F, and let it climb those last few degrees during the rest period.

Let your pork chops rest for at least 10 minutes after cutting. This lets the juices re-absorb into the meat, keeping it tender and moist. Tent foil over the top during the rest period to keep the pork warm. The exception to the resting rule is the slow cooker method. Because the pork was cooked at a low temp over time, the juices should already be well distributed.

The Tastiest Pork Chops Start With the Best Pork!

You’ll never have delicious pork chops unless you start with a great product. Pork from Coleman Natural Foods comes from American family farms, with pigs that are raised crate-free and receive no added hormones or antibiotics.

You can feel good about feeding Coleman Natural pork to your family — and it will taste great, too! 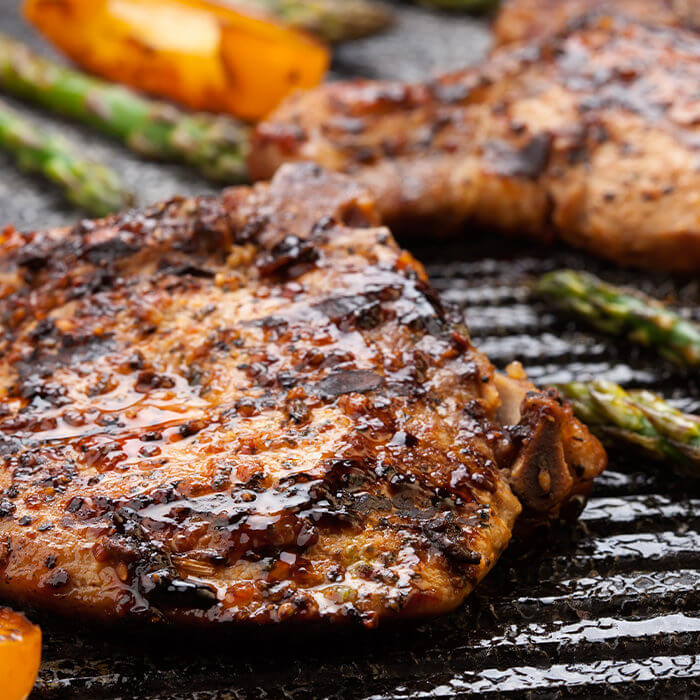 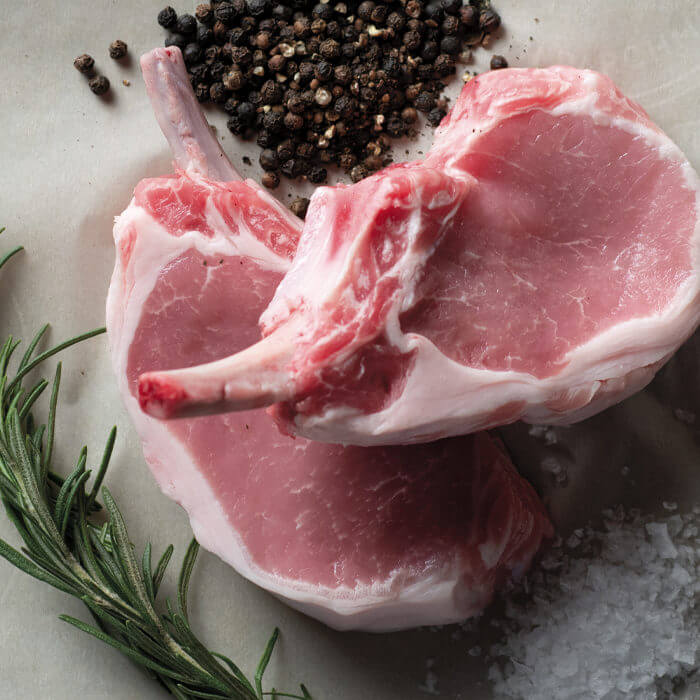 The Difference Between Bone-In and Boneless Pork Chops